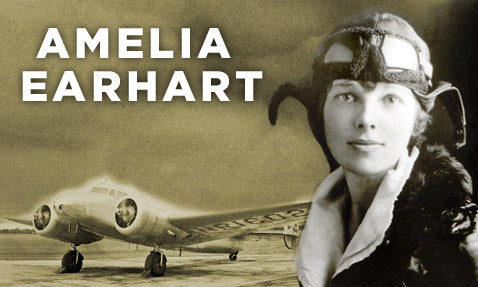 Zonta International sponsors an Amelia Earhart Fellowship of US$10,000 annually to 35 fellows around the globe. For more information about this fellowship award, see zonta.org and search Amelia Earhart.

Despite having to attend six different high schools, she was able to graduate on time.

Earhart was called “Lady Lindy” because her slim build and facial features resembled that of Charles Lindbergh.
Earhart refused to don typical flying gear -she wore a suit or dress instead of the “high-bread aviation togs,” a close-fitting hat instead of a helmet, didn’t put on her goggles until she taxied to the end of the field and removed them immediately upon landing.

She developed a friendship with Eleanor Roosevelt, who wanted to learn how to fly. Earhart had planned to teach her, for which the First Lady even got her student permit.

Earhart met Orville Wright at the Franklin Institute in Philadelphia in 1937, the same year she disappeared.

Earhart had such an impression on public that people often wrote and told her about naming babies, lakes and even homing pigeons “Amelia.”

The United States government spent $4 million looking for Earhart, which made it the most costly and intensive air and sea search in history at that time.